Zerlotti Genetics is located in Pleasanton, a small town, south of the beautiful city of San Antonio, and just 35 minutes from the nearest international airport. 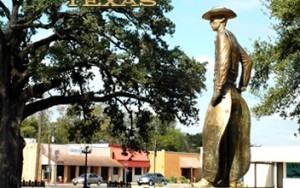 The city of the "Live Oaks and Friendly Folks"

Pleasanton is situated at the juncture of the Atascosa River and Bonita Creek. Pleasanton was founded in 1858 and named the county seat of Atascosa County. It was established because the former county seat at Amphion moved due to conflicts with the Indians. The settlers chose the current town site because of its location at the mouth of Bonita Creek. John Bowen, San Antonio’s first Anglo-American postmaster, founded and named the town of Pleasanton after his good friend and fellow early Texas Settler, John Pleasants. Also known as the "Birthplace of the Cowboy", Pleasanton had a growing population of cowboys around the 19th century primarily to ward off attacks from the Indians. The county seat was moved from Pleasanton to Jourdanton in 1910. Pleasanton was incorporated in 1917.

The City of San Antonio is the seventh most populous city in the United States of America and the second most populous city in the state of Texas, with a population of 1.3 million. It was the fastest growing of the top 10 largest cities of United States from 2000-2010. The city is located in the American Southwest, the south–central part of Texas, and the southwestern corner of an urban region known as the Texas Triangle

San Antonio was named for Saint Anthony of Padua, whose feast is on June 13, by a 1691 Spanish expedition in the area. It is notable for Spanish Colonial Mission, The Alamo, The River Walk, The Tower of Americas, The Alamo Bowl, and Marriage Island. Commercial entertainment includes Sea World and Six Flags Fiesta Texas theme parks. The city is visited by approximately 26 million tourists per year, according to the San Antonio Convention and Visitors Bureau. San Antonio is home to the four-time NBA champion San Antonio Spurs and hosts the annual San Antonio Stock Show and Rodeo, one of the largest such events in the country.

Zerlotti Equine gates are open for visitors all year long.

Pleasanton offers quiet county living, but allows access to the pleasures the big city can offer.